Since 2018, Bang Elite Sport Taekwondo has provided its members with a road map to success based on self-defense, confidence and goal-setting skills. 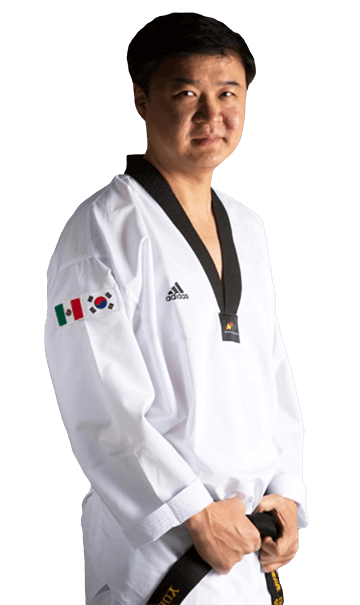 I KNOW HOW DIFFICULT AND CONFUSING
FINDING A MARTIAL ARTS SCHOOL CAN BE.

After my competitive career, I served as Head Coach of Mexico’s National Team for nearly 20 years. Ever since then, I’ve resided in the Houston area with my family pursuing the “American Dream”. My ultimate goal is to bring all the wonderful benefits of taekwondo to our community. Our focus is to develop confidence, discipline, respect, fitness, self-defense, and more to enrich our students’ lives and improve their chances of success in whichever path they choose.

You may have experienced boredom with your usual fitness routine or reached a plateau in your performance or physical fitness results. Our adult programs are the perfect alternative to a boring gym routine, as they help you develop into your maximum potential both physically and mentally by providing real-life self-defense strategies in a fun, focused environment.

We Share & teach The Same Values You Teach At Home.

Our programs have a strong focus on personal development. The foundations of our morals, values and core character traits are formed in our early years. For this reason, the programs at Bang Elite Sport Taekwondo are an essential way to enhance the growth and personal development of young students of all ages. 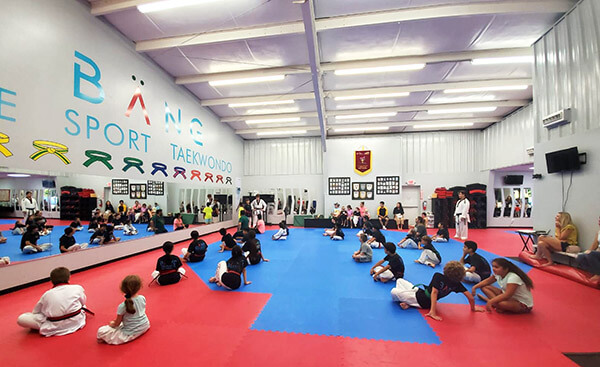 In addition to our primary function, we also serve as the headquarters for Texas Taekwondo Varsity League (aka TTVL).

We focus on the personal development aspect of martial arts, not just self-defense moves.

Our instructors are all certified black belts, qualified and professionally trained to teach martial arts.

Our facility is always clean and features a viewing area for parents, as well as matted floors throughout.

To Train in the
Highest Quality Martial Arts
Program Available

To Focus On
Personal Development
in a Positive Environment

To Offer Programs
Accessible & Enjoyable
by People of Any Age

Taekwondo is the style of martial arts practiced by Bang Elite Sport Taekwondo students.
The journey from White Belt to Black Belt is one of incremental learning and skill development, that students of any age and fitness level can embark on.

One of the most fun parts of martial arts training is the ability to test your skills by competing in a tournament. Tournaments are not only fun for competitors, but they also become a great social experience for parents as well!

From sparring to forms to team demos, these awesome competitions are not only a place where our students can test their skills, but also a place where team spirit is built, fears are overcome, and character is developed. Most importantly, they are tons of fun!

One more reason you will love martial arts at Bang Elite Sport Taekwondo! 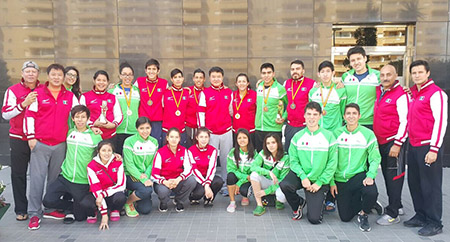 If you want to avoid paying regular pricing or missing out,
this is your chance to try our martial arts program for a ridiculously low price
TAKE ACTION NOW!

We had searched for an extracurricular activity for our daughter for some time. We decided to check out Bang Elite and it has been the best thing we could have ever done. Our daughter who is small and shy has already transformed in the time that we have had her in this program. She has built up so much confidence and is doing so great! Our whole family has noticed a big change in her. Master Bang and all of the instructors have just been incredible. They are patient and kind and teach these students respect and skills that they need to succeed not just in Taekwondo but in life in general. You can tell they truly love what they do and care for each student. Even as spectators, we have learned a lot. We are so grateful for them and cannot wait to see what the future holds. We encourage anyone young or older who is considering learning Taekwondo to come check it out. Highly highly recommend it!!

Bang Elite Sport Taekwondo is an amazing taekwondo school owned and operated by the incredible Master Youngin Bang. My 9 year old son began his Taekwondo journey 4 1/2 years ago at another Taekwondo school and after 3 years of classes and 2 years on that school’s competitive team we made the decision to move him to Master Bang’s dojang in order to give him the absolute best opportunity as a Taekwondo athlete. That was the best decision we could have ever made for our son. In the last year and a half we have seen so much growth in not just his skill, but also in his confidence. He is thriving as a competitor under his coaches Master Bang and Master Vincent and in classes under instructors Mr. Santi, Mr. Mati, and Miss Olyvia. Yesterday he reached his biggest milestone yet as a Taekwondo student by testing for his 1 degree black belt. He did an absolutely awesome job and he could not have done it without his wonderful coaches and instructors. Thank you so much Master Bang for accepting him into your dojang with open arms and for sharing your experience and wisdom. Thank you Master Vincent for always pushing him to give 100% effort. Thank you Mr. Santi, Mr. Mati, and Miss Olyvia for being great instructors, teammates, and role models. We absolutely love our Bang Taekwondo family and cannot wait to see what the future holds as our son begins his next Taekwondo journey as a black belt.

I brought my son here as a reference from one of his friends from school. It started as just entertaining the thought because kids change their minds every day on what they want to do. Bang Elite is absolutely the greatest gift I could have ever given to my son. He has almost been a student for a year, and I could not be any more proud to be a TKD mom to him. The staff, the teachers, are all so amazing. Every day when you walk in, it's like walking into your second home. It's a sense you get of family greeting you at the door. I am so blessed my son gets to be a part of this family.

I can’t say enough great things about this place! From the moment you walk in you feel like you belong somewhere. It’s been a blessing to join here. My little wiggle worm has grown so much in such a short period of time. Like many little ones, my son has issues focusing and sitting still. He is thriving in so many ways, and I know it’s due to the hard work and dedication these coaches put into these kids. Master Bang and his team are superior, to say the least. They are patient, kind, funny, motivating and so much more. I love how they have a “word” of the week to teach meaning and purpose. It’s such a fun environment to come to every night, and the look on my son's face when he learns a new skill and earns a stripe is priceless. Thank you guys for all you do! I highly recommend coming and taking a class. You WON'T be disappointed!

We love seeing the energy & passion for the sport & amazing staff! Bang Elite Sport Taekwondo is top-notch & the students absolutely love it.